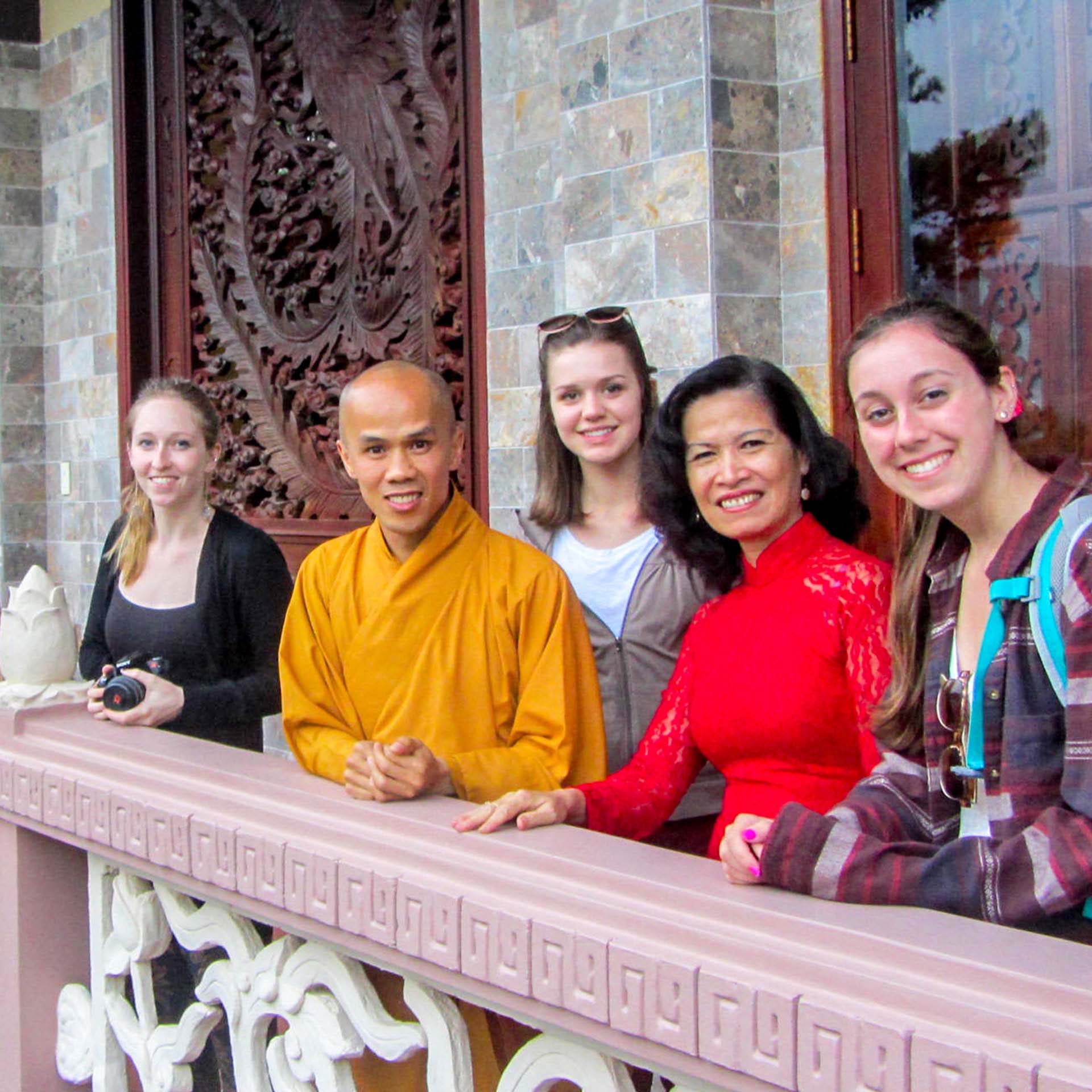 Bui Tran Phuong, PhD
Phuong holds a bachelor’s in history from Paris I University (1972), a master’s from Paris VII University (1994), a master’s in business administration from United Business Institutes (Belgium, 2003), and in 2008 received her doctorate from Lyon 2 University in Lyon, France. Phuong has taught at Marie Curie High School in Ho Chi Minh City, Can Tho University, Pedagogy University of Ho Chi Minh City, and Hoa Sen University. She has been head of the French Department, head of the Office Management Department, and vice president of International Affairs.

During her tenure as president of Hoa Sen University, Phuong helped the university become a sustainable institution and grow from occupational training school to university. She gathered educators from diverse backgrounds, many of whom are also entrepreneurs, foreign professors, Viet Kieu (overseas Vietnamese), and graduates of overseas institutions. She has researched contemporary and cultural history and the history of Vietnamese women. Phuong is a core faculty member for SIT Study Abroad and has lectured on gender and social change and led discussions between SIT and local university students.

Pham Quoc Loc, PhD
Loc was vice president of Hoa Sen University and was previously dean of Culture, Languages, and Tourism. He earned his PhD in comparative literature at the University of Massachusetts Amherst (2011). His research includes translation theories and issues of gender in cultural and postcolonial studies. He has taught international literatures, the Vietnam War in film and literature, and translation theories. He translated Judith Butler’s Frames of War (Verso, 2009) and Edwin Gentzler’s Translation and Identity in the Americas (2009). His article “Western Others and Other Westerns” appeared in Re-Engendering Translation, edited by Christopher Larkosh (St. Jerome, 2011).

Nguyen Luu Bao Doan, PhD
Doan received his doctorate in urban and regional planning and design from the University of Maryland and a master’s in public affairs from Indiana University and is full-time lecturer in the Department of Economic Development at the University of Economics in Ho Chi Minh City. Doan teaches and researches land use policies, urban economics, and innovation for inclusive development. He has published in Urban Studies, Environment and Planning B: Planning and Design, Economic Development Quarterly, and Vietnamese Journal of Urbanism. He is developing a phone app providing accessibility maps for people with disabilities.

Duong Ngoc Dung, PhD
Dung holds a PhD in religious studies from Boston University (2001); an MBA from UBI, Brussels (2008); and a master’s in East Asian history from Harvard University (1995), where he received a Harvard-Yenching Institute scholarship. He holds a graduate diploma in education from Canberra University in Australia and a BA in English Literature from University of Ho Chi Minh City. Since 2008, Dung has been a professor of business management and a professor of international relations. From 2001 to 2007, he served as professor of Asian religions and Oriental studies (USSH, National University, Ho Chi Minh City). He was also appointed head of the East Asian Studies Department (2001–2004) and head of the Indian Studies Department (2004–2007) at the University of Ho Chi Minh City.

Le Thanh Sang, PhD
Sang is associate professor and general director of the Southern Institute of Social Sciences at the Vietnam Academy of Social Sciences. He is a member of the advisory committee for the Vietnam population health study of the Social Sciences Research Council of America. His research interests are demography, social inequality, gender, and environment impacts. Sang has focused on urbanization, migration, social structures, and policies and their effects on inequality in occupational status, income, and accessibility to education and healthcare. Since 2008, Sang has studied climate change and sustainable development.

Dana R. H. Doan, MA
Dana advises the LIN Center on strategy and fundraising and is a board member for Working with Others, a grant scheme of Saigon Children’s Charity. She worked with the US-Vietnam Trade Council and Education Forum and was a member of the AmCham–United Way Vietnam Allocation Committee. She worked with the Metro Chicago Information Center and was a development volunteer in Honduras. She evaluated grants for the Centre for Social Initiatives Promotion and was a board member at AIESEC. Dana received a master’s in public policy (focus on international economic development) from the University of Michigan’s Gerald R. Ford School and a bachelor’s in history and Spanish from Northwestern University, Evanston, Illinois.

Nguyen Van Sanh, PhD
Sanh received a PhD in rural development at the University of Arkansas. He is the director of Can Tho University’s Mekong Delta Development Research Institute, which works to improve the quality of rural life in the Mekong Delta. He focuses on climate change and sustain­able farming systems. He is a committee member for the International Master in Rural Development program. Sanh has advised the Mekong River Commission, the World Bank, and the Environment Defense Fund (on using Vietnamese rice farming to reduce the greenhouse effect), and the Southern Steering Committee. He is a lecturer for SIT and a guest speaker for the Central Economic Committee.